I’ve recently read four books that are at once instructive and painful, hard to put down yet demanding of deep attention and feeling. Two novels address slavery and its long term consequences, and two ethnographic accounts explore poverty, the working class, culture, and race. The four books taken together inform one another in ways I discovered as I read.

Colin Whitehead’s Underground Railroad follows a slave who escapes her plantation and, helped by “station masters” and “conductors,” strives to remain free.  She is pursued by a determined slave catcher who, like Ahab and the Whale, obsessively seeks to capture his adversary.  At each “station” along the way, new aspects of the struggles, cruelties, and prejudices of past and current times are revealed – as are the courage and dedication of those willing to help a slave and the fierce will of the slave to remain free and become free of the trauma of slavery. Often surreal, as if time has bent in some way, the story makes us aware of the treatment of Black people through hundreds of years in America.

“Often surreal, as if time has bent in some way, the story makes us aware of the treatment of Black people through hundreds of years in America.”

Yaa Gyasi’s Homecoming follows two branches of a Ghanian family through seven generations. One branch of the family remains in Ghana, often complicit in the slave trade and embroiled in wars and the struggle for independence as a country. The other branch emerges from slavery on a Georgia plantation and moves through the Civil War and Great Migration toward present day hopes for real freedom in America. The importance of family and community, knowing where one came from, and confronting traumas passed down through three hundred years weave through this book. I found the chapters so rich and moving, I often needed to stop for a while and let all I had taken in settle and inform me at a deep level. The book is beautifully written, often lyrical.

“I found the chapters so rich and moving, I often needed to stop for a while and let all I had taken in settle and inform me at a deep level.”

I was glad that I read Railroad first, as it is a story that maintains gnawing tension from beginning to end. It is probably not a read for the faint-hearted – but should be. Together, the two novels are powerful instruction about the long lasting effects of the slave trade and the exploitation of people stolen from their homelands and families.

And now for a different, but in some ways related theme.

J.D. Vance’s Hillbilly Elegy: A Memoir of a Family and Culture in Crisis is a first person account of what it is like to try to escape the traumas of the Appalachian culture and struggle with the demands of a middle class life in a poor rustbelt town. Vance describes the migration of hillbillies from Appalachia to the north and west to seek jobs that would sustain their families. Vance says hillbillies and their ethos and culture have spread everywhere in America  — reminiscent in some ways of the Great Migration of Blacks from the South seeking jobs and a better life. He wants the reader to understand what it feels like for the White working class to struggle with cultural and class issues and what the long term consequences are for individuals and families. Looking critically at both the hillbillies and the “system,” he challenges the reader to think more broadly and deeply about the obstacles and despair experienced by those who want to raise the standard of living for themselves and their children. He points to the vital importance of extended family and formal and informal community support for working class people who are trying to do more than survive. At this time in our country, this is an important read.

“He wants the reader to understand what it feels like for the White working class to struggle with cultural and class issues and what the long term consequences are for individuals and families. ” 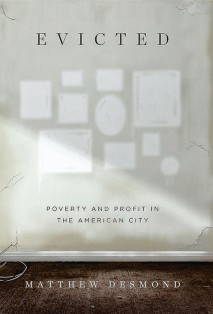 Matthew Desmond’s Evicted: Poverty and Profit in the American City is at once a moving and disturbing tale of eight Milwaukee families facing evictions and a scholarly discussion of eviction and how eviction is at the root of poverty and inequality. Notes for each chapter detail research and evidence for Desmond’s comments and his recommendations for changes. Desmond takes us inside the lives of Black and White individuals and families that struggle to find and maintain stable residences and lives. We see their courage and grit, their hopes and concerns – come to care about them and grimace at some of their choices.  He introduces us to several landlords and shows us both the compassion and the greed of these people. The stories illustrate the effects of eviction on children and their education, on the ability of people to continue at their workplace while seeking new housing, and on the psychological demands on families. They reveal the interrelatedness of factors contributing to inequity and poverty. To understand the lives of people living at the poverty level, Desmond lived in housing in poor areas and shadowed his subjects as they lived their lives. He supports his observations with data gathered from his extensive research studies of eviction in Milwaukee.

All books are available at Robbins Library/Minuteman Network; however, there are wait lists for them. More information on the Robbins Library Website here.

< Previous Next >
+ Add your own event Eventbrite
Loading Comments...